Your guide to a typical half-day visit

Though the Canyon offers visitors a wide range of excursions, trails and activities, two main attractions top almost everyone's list on their first trip to the park: the Templar chapel of Saint Bartholomew and the large resident Griffon vulture colony.

This quick practical guide tells you all you need to know about where to park, what to see, etc. on a basic visit to the Rio Lobos, focusing on the area close to Ucero with a short stoll to St Bartholomew's chapel and a drive up to the Galiana viewpoint.

We thoroughly recommend making a first stop at the visitor centre, the 'Casa del Parque', just outside Ucero, for up-to-date visitor information and to see the interesting interactive exhibition. The medieval castle of Ucero stands on the hillside just above the visitor centre, and can be visited on foot via Ucero.

If you want, you can walk into the park from here, or if you prefer you can drive on a little further, following the road on to the park entrance at the foot of the Galiana pass. As we head towards the Canyon we start to see its distinctive ochre-stained sheer rock walls. 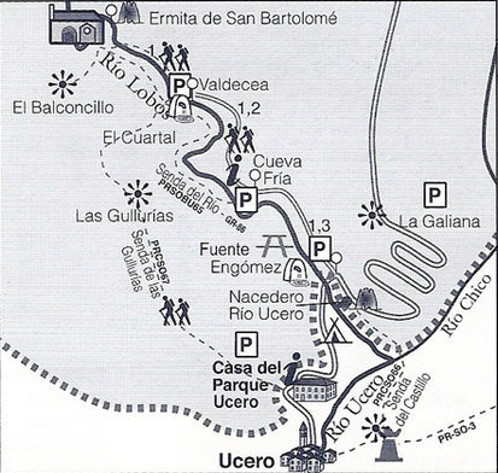 The chapel esplanade is just 1000 metres away from Valdecea and there are two ways to get there, both on foot. On the one hand we can follow the River Trail, which involves the potential difficulty of stepping stones to cross the river and some areas of slightly rough ground, or we can walk along the unpaved roadway which continues as far as the chapel, an easy stroll that can be done even with sandals and baby buggies.

The River Trail runs along the entire length of the Canyon and can also be picked up at Fuente Engómez or Cueva Fría. 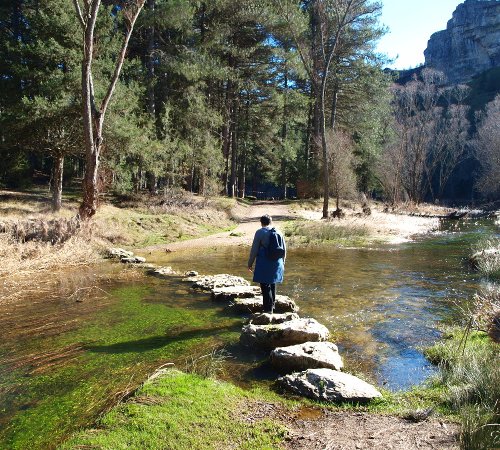 Sitting on a bend in the river, nestled under breathtakingly beautiful rock walls, flanked by pretty lilly ponds, and guarded by a legion of Griffon Vultures whose nests pack the narrow rock ledges, it is no surprise that this enigmatic chapel has long been associated with esoterical theses. However you feel about this, there's no denying its an absolutely magical setting.

The chapel was built in the 12th century in Romanesque style. It is noted for its decorated stone corbels depicting enigmatic figures and symbols, and above all for its two identical rose windows with fine tracery forming five overlapping heart shapes, now adopted as the park's logo. The chapel is open to visitors at certain times (see previous page) and on 24th August, the festivity of Saint Bartholomew, plays host to a popular procession and noisy fiesta. Weddings are also occasionally held in the chapel.

The Great Cave and the Balcony

Beyond the chapel, below the vultures' nests, the mouth of a vast cave invites you to enter and enjoy the view from the reverse side, framed in stone. Prehistoric engravings on the roof of the cave bear witness to the presence of man in this special place since time immemorial.

And standing high above the chapel esplanade, there is another great mound of rock shaped by the elements which you are drawn to climb up and explore. This feature is known as the 'balconcillo' (balcony), and is also riddled with caves, rock canopies and a window in the rock wall that allows you to look out over the next section of the canyon, round the bend.

Just a couple of bends after the chapel we come to an impressive rock wall where a small collection of traditional beehives (made of hollow tree trunks) are perched on a high ledge. These are referred to as the monks's beehives, and are supposed to have belonged to a theoretical community of Templar monks, who knows...?

Before going back to the car you may be tempted to walk a little further along the River Trail to see more. Beyond the chapel the canyon becomes narrower and more intimate, and for 5 or 6 kilometres the trail takes us through the very prettiest part of the park. If you would like more information about a longer walking route, see the next page.

Back to the car, follow the signs to San Leonardo for 3 km. The road climbs up a steep mountain pass, with 5 hairpin bends, and the views become increasingly impressive. The car park at the top of the hill means you've reached the Galiana viewpoint, which looks out westwards over the bottom section of the river Lobos canyon, and southwards past the castle and village of Ucero, across miles of woodlands, to the town of El Burgo de Osma, the Douro valley and beyond to distant mountains.

Apart from the super views, the Galiana viewpoint is an ideal place to watch the park's magnificent griffon vultures riding the air currents that come up against the rock wall. Depending on the weather conditions, there's a good chance that you will be able to see the vultures very close to, as they whistle past our noses. 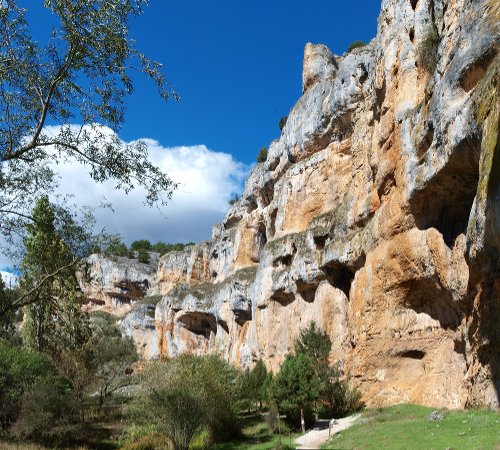